Giving you a piece of Balkan through Animation: Balkan Tales at Anibar 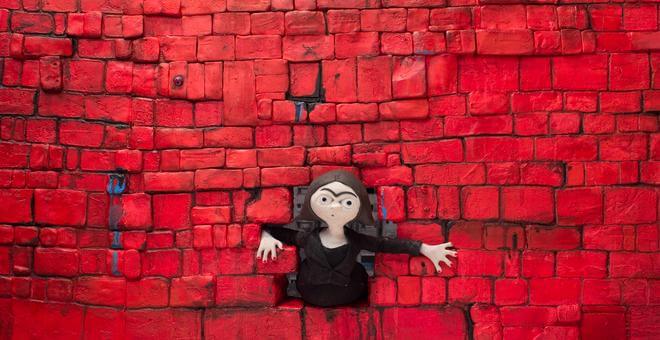 1st Presentation: One Frame at a Time

A mix of crafts, organic materials and pixels in the digital era. Playing with paper and clay from

childhood to adulthood. Joan Kamberaj in this edition of Anibar is teaching us about the digital arts and crafts. Presentation of his work and conversation with him will be held on July 16 at Jusuf Gërvalla’s Cinema at 12:00. Joan has created different animations but most of his specifications are hand-made. His work includes short videos, movies and commercials. His short film “Abeo”, to which we will talk, has appeared at various international film festival has also won awards. Joan has worked in studios in the US and Albania.

Synopsis: Lost in mental illusions he escapes through changes.

The second presentation on behalf of the “Balkans Tale” comes from Visar Arifaj from Kosovo. He will share his experience in film creating and especially animation with you.

Visar Arifaj was born on June 4, 1987 in Prishtina. He is a painter, politician, legendary leader of the Strong Party, he ran in the 2013 Local Elections for Mayor of Pristina Municipality, and later in the 2014 General Elections in Kosovo with his Party. Visar is a designer and studied in the Faculty of Arts in the University of Prishtina. He is a self-proclaimed billionaire, after his declared wealth reaches 1,7 billion euros. He has also declared that the first painting he has done in primary school is worth 1 billion euro. Arifaj is also known for his funny and ironic sayings that show the reality in Kosovo.

Visar Arifaj’s presentation will be held on 16th of July 219, at Cinema “Jusuf Gervalla”, in Peja starting from 14:00 pm.

3d Presentation –  How to create Dystopia?

Ana is a filmmaker and animator who is coming to Anibar to share her story of her work experience with the “stop-motion” technique which she has specialized in creating beautiful and dystopian botulas from plasticine. She will hold her staging on July 17, 2019, at the cinema “Jusuf Gërvalla”. She, in this year, will present her work with “Stop Motion Animation”, which is a technique used in animation to give life to static objects on the screen. In their movie “Rabbitland Pink Brainless Rabbits”, director Ana and Nikola have used a free democracy that enables us to have new solutions every day. On the other hand, “Untravel” tells us about a gray world and isolated on a big wall. They are currently working on the movie “Money and Happiness” for the “perfect” economy. During the festival, Ana will show their films, references, work processes and the secret behind the screened material. But for them, the most important thing is that animation nowadays is a powerful tool to address important social and political issues.

Ana Nedeljkovicwas born in Belgrade in 1978. She graduated in painting from the Faculty ofFine Arts in Belgrade. She was awarded a PhD in art practice at the same faculty. She is a visual artist working in the media of drawing, installation and animated film, and is also active in art education.Nikola Majdak Jr. was born in Slovenia in 1972. He has an MFA from the Faculty of Dramatic Arts in Belgrade, camera department. For the past 20 years he has been a freelance cameraman, animator, director and lecturer.  Their first film “Rabbilitan”; (2013) was awarded the Crystal Bear at the Berlinale. It has also received numerous other awards and has been shown at more than a hundred festivals worldwide. Their second film “Untravel” ( 2018) was premiered at Berlinale, screened at Annecy and Sundance and nominated for the Annie Award.

4th Presentation – This is how I do it

The animator and artistic director Daniel Šuljić comes from Zagreb in order to give us an insight into his approach to animated movies and he also will show us some of is films.

You will have the chance to meet the croatian director of animation, Daniel Suljic, on July 18, 2019, at the Cinema “Jusuf Gërvalla”, in Peja.

Daniel Šuljić is an animation film director. Born in Zagreb, from 1992 to 2010 he lived in Vienna, and from 2010 on he has been living and working in both cities.He studied at the Academy of Fine Arts in Zagreb, and from 1992 to 1998 painting and animation at the University of Applied Arts in Vienna, Masterclass C. L. Attersee, where he graduated.

From 2005 to 2008 he was a lecturer of classical animation at the Institute for Media Design at the University of Art and Design in Linz, and in 2006 he was given the title of honorary professor at Jilin College of the Arts Animation School in Changchun, China. From 2010 to 2012 he served as an artistic consultant for animated film at the Croatian Audiovisual Centre, and from 2013 to 2017 he was a member of the artistic council for film in the City of Zagreb. His films (selection) Evening Star (1993), Leckdonalds (1995), The Cake (1997), Sun, Salt and Sea (1997), Ich kann es mir sehr gut vorstellen (I Can Imagine It Very Well, 2004), Kurzes Leben (Short Life, 2007, co-dir. Johanna Freise), Transparency (2015), From Under Which Rock Did They Crawl Out (2018) were shown at several hundred international and national film festivals, different TV channels across Europe and earned numerous international awards. He is a member of festival juries and had several retrospectives (Anifilm Trebon, Monstra Lisabon, ITFS Stuttgart). Since 2018 he is an assistant professor at the Department of Animation and New Media, Academy of Fine Arts, Zagreb and the Croatian ambassador of the European Animation Awards. Since 2011 he has been the artistic director of the World Festival of Animated Film Animafest Zagreb.

The presentation of Daniel Šuljić is supported by the Croatian Audiovisual Center.