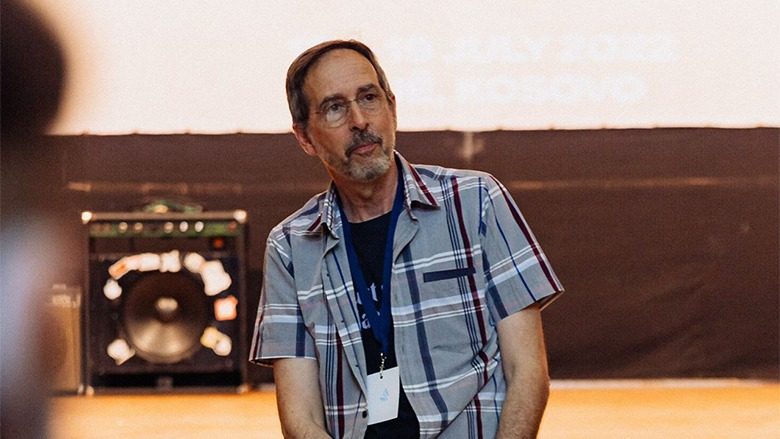 We are profoundly proud to have brought for the first time in Kosovo, the distinguished animator Steven Woloshen. A showcase of 20 films was presented today at Kino Jusuf Gërvalla followed by very interesting questions from the guests.

Steven Woloshen has developed these films during his 40 years of his career. His work is a mix of music and animation, synchronized with each other. A collection of images, his films are a personal story, as a family element takes place in it. He was previously working with documentaries, and had a lot of access footage left to go to waste. So, he decided to modify those parts, and create new movies from it. The idea of these films started by accident, rather than wasting materials, he added soundtracks to them and produced these films, as he likes to call them “films from garbage”. He feels as a musician most of the time because of the sound he hears and then ends up incorporating that sound into his films, as he follows the rhythm of the music while animating. The music in the background of the films is selected from the director’s favorite’s playlist. The audience liked to call him “The Animation DJ”.

His artistic work has no boundaries. “It’s like a painting.” he says. His work process is that he loves to plan his work, keep things in mind, laying it dry, think about it once more and then some more and then he produces it.

In addition, Steven decides on the titles of the films based on how easy they are to incorporate into the movie. Moreover, he also likes to play with other director’s ideas and turn them into “handmade” ideas.

The animator gives a lot of credits to calligraphy as the reason how he ended up producing films in animation.

He is a firm believer that an artist should create when they want to create, without pressure, and with no deadlines. That is also a reason why he mainly works without a producer, but rather as an independent artist. “Artists will always lose if they have to ‘explain’ their art to someone, on the contrary, the one that pays will always win.” he added. However he tries to make Film Festivals his deadlines, to get work done.

The audience also had questions about the technical process behind the films he produces such as methods, techniques, types of paint/ink and inspiration.

We are convinced that this indeed was one of the most special program and we take pride that we had the honor to bring this program to our loyal audience on our 13th edition of Festival.

The retrospective is organized with the support of the Canadian Embassy in Zagreb.